No Result
View All Result

The Amount Teachers Will Lose In New Adjustment Of TSC Payslip

A section of teachers is set to lose part of their salaries as TSC adjusts their payslips. Teachers from Nyandarua county, Murang’a, Kandara, and Kigumo sub-counties are set to get adjusted salaries that will see them miss thousands of shillings from their payslips after a long time.

The Commission has however retained most of the ASAL areas as hardship areas. Some of the counties retained are Garissa, Kilifi, Isiolo, Lamu, Marsabit, Mandera, Narok, Samburu amongst others.

In July 2021, the Teachers Service Commission (TSC) adjusted salaries for newly promoted teachers. This is after an outcry from the affected teachers and through the Kenya Union of Post Primary Education Teachers – KUPPET.

Via circular titled CBA implementation anomalies for senior masters IV, the Commission says the salaries for the affected teachers will immediately be revised upwards.

TSC Distribution of Recruitment Vacancies, Slots Per County In Each School July 2022

During the preparation of the Conversion tables, the salary scales were structured in a manner that a teacher would attain the 4th Notch in the fourth (44) Year as per the CBA review cycle. 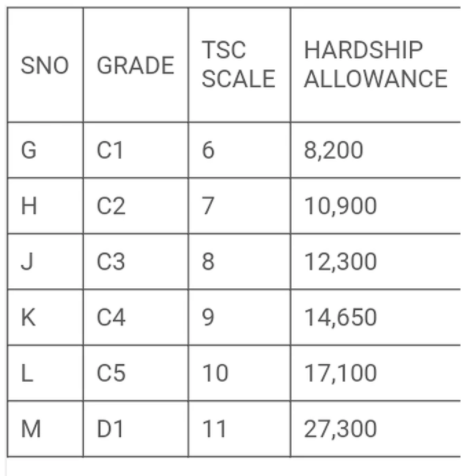 This was in anticipation that every Fourth year, the Commission would review the salary component of the CBA in each review cycle and teachers will convert to new salaries before attaining the 7th notch.

Promoted 1,341 Deputy Principals I in T-Scale 13 (D3) were the biggest beneficiaries. These teachers are now pocketing a monthly basic salary of 104,644 shillings.

TSC To Recruit 6000 Interns This Year As It Plans To Retrain Over 110,000 secondary school teachers On CBC

TSC Distribution of Recruitment Vacancies, Slots Per County In Each School July 2022

No Result
View All Result